One of the many rituals of the weekend is attempting to check off an item or two from a growing list of tasks around the home place. This week’s list had a new addition. One of our kitchen cabinet doors came loose from its proper place. In frustration, I removed the door and propped it against the fridge a few days ago.

Unlike other projects I’ve put off for days, weeks, and even months; I attempted to take care of this one with some sort of urgency. In the process, I managed to ram a screwdriver into my upper lip, which left a small but painful cut.

The pain was worse than the actual wound. As it happened, I just knew it was going to bleed everywhere. I mean it felt like it. As I held my mouth and stumbled to the bathroom for treatment, I thought I could feel the blood pouring from the lip.

I’ve always known I don’t tolerate pain very well but this would have to be a record set for the most pain with the least amount to show. 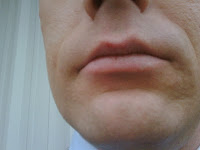 Does that look like it hurt? You can’t even tell it’s cut, can you? No, I can’t either.

How it happened: Instead of using a step ladder, I climbed upon the kitchen counter with the cabinet door, 4 screws, wood glue, and a screwdriver in hand. I successfully screwed the first top screw in its place and went to work on a bottom screw. As I go to work on the bottom screw, the top screw popped out of its hole, sending the door toward my face. I go to catch it with both hands… I caught it for sure. In my left hand was the screw driver, which ended up in my lip with weapon-like accuracy.

After a few minutes tending to the small wound, I finally secured the cabinet door and looked to see the rest of my to-do list.

Next up: Replacing a rotting back door. Surely that won’t be dangerous.