One of my oldest friends has a picture he won in a raffle a few years ago. It hangs in the back of his family business where few get to see it, but I’ve always liked it. I make a point to go look at it when I visit. To the untrained eye (or the unfamiliar), its nothing special. Just a two lane road that runs underneath a canopy of trees. Other than the leaves and branches that hang over the path, the yellow stripes in the middle are about the only features that stand out. It’s a large photograph in a nice sturdy frame and anybody would be proud to hang it on the wall.

One time I helped him move and the back seat of my old truck was where we transported this picture, along with all his other pieces of artwork. Other than the paintings and drawings of ducks, duck hunting, and retriever dogs; I noticed most of his collection was made of artwork crafted by people from our hometown. People from our past. Our childhood. Talented storytellers. Some of whom died long ago. But their work is still on canvass or picture paper for us to look at.

The picture of that narrow road was taken prior to 1995. The highway department cut those trees down and put in a new road and bridges where US 259 cuts across the Sulphur River on the way to Omaha. As a kid, it was often the spooky part of any trip south. Any time we were coming home from some place or another, you always knew you were 16 miles from home went you passed through the tunnel of trees around the Sulphur. It was shady all day on that road back then. The only break in the canopy was when you crossed those narrow old rickety bridges over the river and the flood relief slough.

The picture on the wall doesn’t capture that essence, but it brings those memories. It probably brings about similar memories for anybody who stopped long enough to look at it.

That friend of mine is one of several back home who collects local art. My parents are local collectors too. My Daddy has a copy of an old railroad map from a hundred plus years ago hanging on the wall in his room. I love maps so I naturally gaze at it when I get the chance. That map shows the old Texas & Pacific rail line as it spanned north and east Texas. Towns that aren’t even around anymore are dots on this extra long drawing.

My Mother has dozens of paintings. Some of them have been hanging around since before I was born. There are a few from Mrs. Lollie Moser. Over on another wall is one painted by Pam Prather. My aunts Betty Sue painted a while. Mama has some of her work. 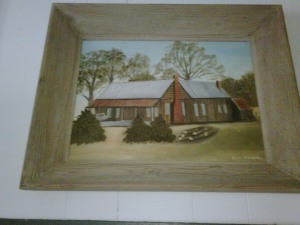 Erma Shumake painted one of the old Shumake house near New Hope. My Great-Grandfather Ed Shumake was raise in that house along with his brothers and sisters. His brother Uncle Penn Shumake raised a large family of his own there. My cousin Shirley still lives there today.

The hometown isn’t known to the outside world as an arts oriented place like Salado or Marfa but its people have produced treasures any serious collector ought to be interested in. 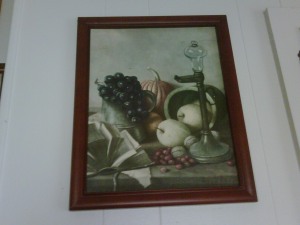